Fantom continues to attract investors as the billionaire investor and founder of HyperChain Capital Stelian Balta adds another $15 million. HyperChain has a considerable investment track record in the past few years, a practice that enables them to keep doing well as other funds implode in the crypto winter.

As the cryptocurrency ecosystem undergoes its regular, cyclical bear market that has come to be known as the crypto winter, the top investing firm HyperChain Capital is showing no signs of wavering in its support for Fantom, following an additional $15 million investment in the protocol.

We remember that on 10 March 2022, Fantom announced that one of its key developers, Andre Cronje, has announced his departure from the project as of the end of March 2022. This update caused the price of FTM to drop by over 20% over 24 hours.

What is Fantom (FTM)?

Fantom (FTM) is one of the best-performing tokens in the market. It is the governance token of a directed acyclic graph (DAG) smart contract platform, popular for eradicating the issues related to smart contract contracts.

The platform provides higher transaction speed, with a more reliable infrastructure backing up the platform. Fantom launched in 2018, but the mainnet OPERA of the platform came out in December 2018. The platform’s creator is Dr. Ahn Byung Ik, but Michael Kong is its current CEO.

A unique feature of Fantom’s Mainnet is the Lachesis mechanism, which is responsible for 2-second transaction finalization and also brings several improvements to the existing proof-of-stake consensus.

The native token of the Fantom blockchain (FTM) aims to “grant compatibility between all transaction bodies around the world.”

This latest eight-figure investment follows two previous investment rounds including an initial investment of $2.5 million made in 2018 when Fantom was founded and a $15 million investment in April of 2021.

The Fantom network is a high-performance, scalable, and secure smart-contract platform designed to facilitate decentralized, scalable and secure applications.

According to data from the Fantom Foundation, there have been more than 178,000 smart contracts launched on the Fantom network to date, which process more than 850,000 transactions per day on average. There are currently more than 2.85 million unique wallets, with thousands more being added every day. As Fantom offers absolute finality, transactions can never be reversed and it offers institutional-grade security to distributed networks.

According to the official announcement shared by Fantasm Finance DeFi protocol, its mechanism was drained of $2,600,000 on 9 March 2022. Per the post-mortem, the exploiters utilized BNB Chain, Fantom, and Ethereum. The exploit was triggered by a previously unknown error in Fantasm’s pool contract.

The contracts’ devs missed the condition to check for the minimum amount of FTM injections required to mint XFTM, a synthetic asset of Fantasm. This flaw allowed the attacker to mint XFTM tokens with only FSM and exchange XFTM for FTM. The repayment campaign starts on 11 March 2022

They swapped FTM tokens to Ethers and moved the ETH from the protocol via Celer Bridge. The total amount lost amounted to approximately $2,622,097. On 10 March, the attackers started to wash their loot through the Tornado Cash mixer.

With the tides constantly shifting between bearish and bullish conditions, it is almost impossible for any of the top contenders to maintain their ranks. Yet, some things happen that overturn the market. One example is when the Fantom project announced its integration with 123swap‘s uniquely designed framework: non-custodial, cross-chain, and decentralized.

When applied to crypto ecosystems, Blockchain technology offers opportunities and benefits to businesses through greater transparency, increased security, and easier traceability. The network is open-source and fully permissionless and uses an Asynchronous Byzantine Fault Tolerance (aBFT }. Capitalizing on its full potential depends on seamless integrations with other legacy back-end systems to facilitate better outcomes.

Here’s how the blockchain process applies to almost every industry, and how it motivates interest and investment in blockchain technology integration over the past few years.

This event can help FTM gain mainstream acceptance among crypto stakeholders and inspire upward price movement. However, with Cronje gone at the end of March 2022, what is the outlook for FTM’s price and what direction can Fantom developers hope for in future?

Looking at the price increase of FTM in recent weeks, the token looks like a good investment. FTM price was bearish during the initial phase; you could buy Fantom at $0.02 initially and then dropped as low as $0.003 in the subsequent weeks. Even though some investors early lost money, prices soon turned bullish.

In May 2019, prices plunged to depths of $0.02 once again. After consolidating in this zone for a while, prices dropped further towards $0.003 and continued to dip.

The token maintained its bearish prices until the onset of the 2020 bull run. The bull run extended the price action even more.

The prices once again knocked $0.02, and it remained bullish. In 2021, the prices turned even more bullish as the Fantom price began its journey towards $1, maintaining its upward trajectory to the current price range of $1.98 and $2.2 in February 2022.

In July, prices dipped as low as $0.12. A bullish outburst followed this bearish momentum as FTM broke resistance levels, finally reaching another all-time high of $1.66.

In September, the token dropped again to $0.98 before rallying for another all-time high at $2.33. Prices turned bearish again, dropping to $2.02 in October before finally reaching their all-time high of $3.48.

The price chart analysis of the Fantom coin shows the token can record price increases for both the short and long term. According to the technical analysis below, a bullish short-term trend is highly likely to occur. The current Fantom price is up by 2.11% within the past hour. The cryptocurrency is expected to continue on an upward trend, with its trading volume rising by 76% within 24 hours. Currently, the volume-to-market cap ratio is at 0.298, with a total crypto market dominance of 0.07%. The Fantom token is ranked #63 by market cap. The coin’s price has performed relatively well since its launch, and the projections say that the price could reach $10 by 2031. Below is a chart analysis of the trend of FTM token future price. 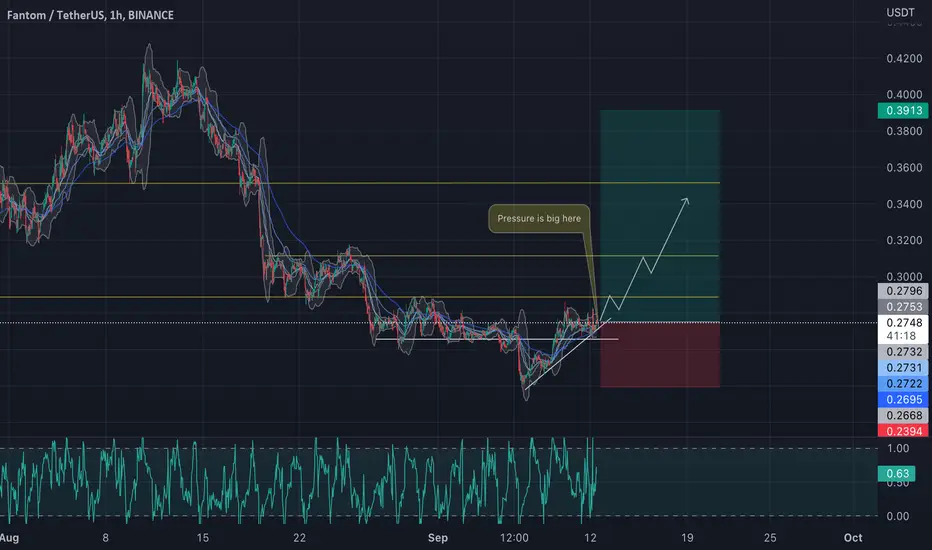 The Fantom token price is expected to continue in an upward trend. FTM holders stand to benefit significantly from a long-term hold of the cryptocurrency. The anticipated price rise of Fantom could translate to significant gains for FTM token holders in the long term. FTM token price has essentially performed steadily since its launch, and the token’s price is expected to continue throughout the year. As per the predicted figures, FTM could trade at an average price of $0.42 by the end of 2022. By 2025, the price of the FTM token could reach $1.37, trading at an expected maximum price of $1.62. Further, Fantom token price predictions show that it can trade at an average price of $9.50 by 2030.

Wallet investor provides a bearish price prediction for the FTM price. The platform predicts that the FTM token is terrible for a short-term investment strategy. As a short-term investor, the FTM cryptocurrency is projected to be traded at an average price of $0.0168, which translates to a price decline from the current price.

The Cryptopolitan platform maintains a bullish position for the price of Fantom. The predictions indicate that the token will continue to rise steadily over the years; however, the token price rise could accelerate over the years. As per the price analysis, the token’s price is projected to continue, registering minimal price increases in 2022 and 2023; the projections show that the FTM token could trade at an average price of $0.64 in 2023. Further price prognosis shows that the Fantom price could reach $13 by 2031. Below is a detailed analysis of the FTM price predictions from 2022 to 2031. 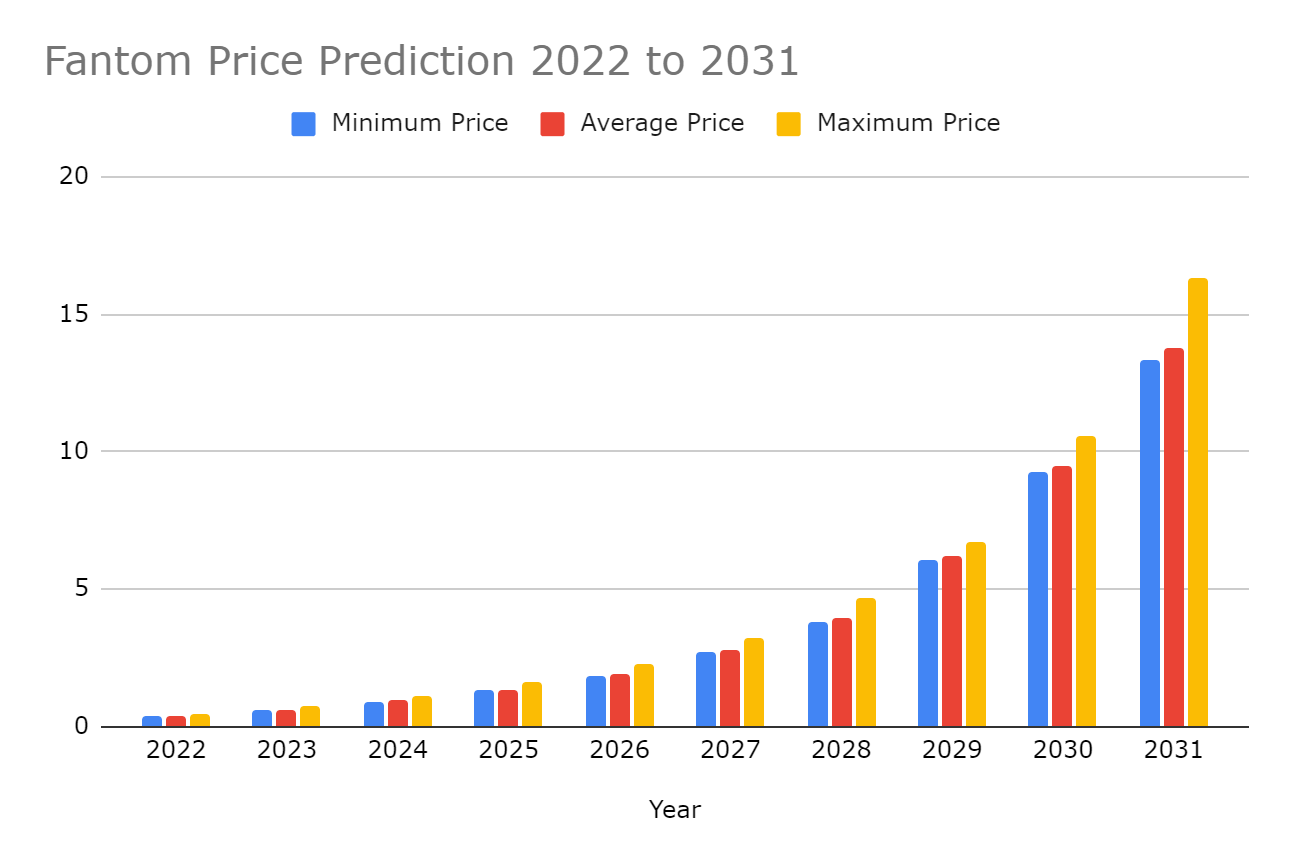 FTM price prediction 2022 shows that cryptocurrency price will increase modestly from the current price. Minimal changes are expected to occur during this period from the time of this writing to December 2022. Based on Cryptopolitan’s analysis, the highest possible price for FTM by December 2022 is $0.40. Typically this is an ambitious forecast that translates to a bullish trend. The predicted price range of FTM in 2022 lies between a minimum and maximum trading price of $0.40 and $0.45. The average price of FTM in 2022 is projected to be $0.42.

The Fantom price forecast for 2023 appears to be bullish over the long term. The price chart appears to gain significant momentum since it’s predicted that the current bear market will have flipped to a bullish market. Therefore, the predicted prices of FTM show that the average trading price of FTM in 2023 is $0.64, indicating a significant growth from the current price. Similarly, the predictions show that Fantom token price could range between $0.61 and $0.77 in 2023.

By considering the current analysis of the price action of FTM, the FTM coin is expected to experience an aggressive bullish momentum in 2025. The price of FTM is expected to increase exponentially during 2025. The FTM token is projected to average a market value of $1.37 in 2025. Similarly, the exponential growth in the price of FTM is expected to continue through the year with minor fluctuations and retesting of the resistance levels. According to the careful price analysis, the price forecasts indicate that the coin can trade at a minimum price of $1.33 and a maximum price of $1.62.

By 2027, the Fantom price prediction positions the crypto asset’s price as a bullish coin for the rest of the year. Essentially, the prices increase periodically; however, the growth is characterized by price retracements throughout the year. The price prognosis shows a general increase in the market cap as well as the price of the token, estimating the minimum price to be $2.69 and the maximum price to be $3.25. The projected average price of Fantom in 2027 is $2.78.

In 2028, the Fantom coin continues to behave in a bullish manner. The token generally records price gains from Jan to December of 2028; however, the growth isn’t smooth as there are several projected instances of price retracements. Despite the price volatility, the price prediction for 2028 shows FTM price will average at $3.93, with a maximum possible value of $4.69 and a minimum price of $3.82.

The FTM price prediction for 2029 remains optimistic as the prices are estimated to continue increasing exponentially. The Fantom token shows that the cryptocurrency will record new higher highs in 2028. As per the predictions, the expected minimum and maximum prices of the Fantom token are $6.03 and $6.69, respectively. The price of the FTM token is expected to average $6.23 in 2029.

By 2030, the crypto market, in general, appears to be taking a significant upward trend. The analysis performed on the Fantom FTM price chart indicates definitive positive growth. As per the findings, the price of Fantom is expected to range between $9.25 and $10.58. The projected average price of FTM in 2030 is $9.50.

Many cryptocurrency tokens rely on a certain level of public relation support to ensure the overall success of the token. Most Altcoins require an effective marketing campaign to ensure massive adoption of their platform. The Fantom ecosystem is a beneficiary of positive marketing. Crypto industry influencers are often at the forefront of influencing people’s perspective of a specific token. The Fantom token has a significant following across social media platforms. Optimistic tweets and information about a token eventually translate to more adoption of the token and its ecosystem in general. Today, the FTM token enjoys good support from industry influencers as most predict a general bullish trend of the token’s future prices. Below is an example tweet in support of the FTM token.

The Fantom ecosystem is an impressive Directed Acyclic Graph (DAG) that provides DeFi services with the help of smart contracts. Its robust technology that aims to streamline the smart contracts field has been massively backed by crypto enthusiasts, making it one of the favored tokens for significant future price growth in the DeFi sector.

Fantom blockchain offers real utility and has the potential to rival Ethereum. Blockchains like Fantom and Solana have been predicted to dominate the future of WEB 3.0.